oh my oh my… england what is going on?!

fun in the sun- i don’t think so. hey ho lets forget about whats outside the window and think of all the amazing things we can do this summer.

So festival season is upon us.. and i still didn’t get a glastonbury ticket 😦 theres always next year i suppose.

Last year i went to 2 festivals- Boardmasters and V Festival. Which i would both recommend for anyone!

No Ibiza for me this year.. or is it. I will probably end up out there for closing party’s so watch this space.

Me and Rust have just got back from MEXICO which omggggg… was amazing. I really didnt want to come home- it was the best holiday i have been on. The most incredible country and beautiful people i have ever met.

I also managed to fulfill one of my biggest dreams ever. I SWAM WITH DOLPHINS. and not only one… FOUR. all to myself hehe. They are the most beautiful creatures on this planet. I was honestly considering quitting my job and becoming a dolphin trainer.

Apart from that, i haven’t got much else planned for summer. Just a lot of hardcore saving for the house. I also start my new job on Monday, which is exciting. Its a new challenge for me and i am going to continue my hairdressing and makeup as a separate business on the side.

Well i hope everyone has a lovely summer and il speak to you soon.

Every year you should set yourself goals to reach, this can be anything!

Today I will share with you my goals for the year and certain things I believed I lacked on last year.

Fitness, last year I worked so hard at the start of the year to get my body back in shape and I was doing so well untill I went on holiday and then I just gave up! What a waste. So this year I have promised myself that I will stick to it. I have joined the gym and started doing exesize DVDs and workouts from home. Rust has also been a big help as he really encourages me to go for my goal and he has been going on runs with me and supporting me though it! I have also been eating a lot healthier recently and once again I will stick it. Lean in 15- this book is amazing and all the recipes in there are so easy to make and taste amazing!

Do what I enjoy. I need to stop putting everyone else before me for a change and actually think about myself, I’m going to be selfish! Haha. Everyone deserves to have some ‘me’ time and I believe it makes you appreciate life a lot more. My goal is to spend time with myself and people around me doing things that I enjoy and making amazing memories 🙂

Further my career. I believe that I work extremely hard at what I do and I really enjoy it. So this year I am pushing myself to the next level. In anyway I can I will make the most out of my job, because at the end of the day who wants to be doing something their not happy with?

Relationships. It’s time to focus on the people that mean most to me. Spending quality time with the people that are always there and taking no one for granted. Family, boyfriend and friends. Everyone deserves to have a good network around them.

Finances. The boring one. I MUST set myself the goal to save save save!!  This time next year I want to be ready to purchase mine and rustys house and then get ready to set off and see the world!

And finally, I need to set a goal to love myself.

In life I believe you won’t get anywhere if you continue to be unhappy with yourself. Everyone has flaws and no one is perfect. Ignore what everyone looks like and ignore what everyone else is doing. Live your life the way YOU want and don’t worry about anyone else. You’re perfect just the way you are. (I need to tell myself this haha) so from now I need to stop worrying about life and understand that nothing is ever going to be perfect. Just be grateful for who you are and what you have. 🙂

This was by far one of the best festivals i have ever been to!

Rust, Beth, Jake and myself booked it last minute for Jakes 22nd Birthday thinking the weather was going to be terrible.. and we ended up sunburnt.. result haha!

It was a 2 1/2 hour drive down to Newquay where the festival was held, right on the beach front.

We set up our tents and decided to have a nap as we were up at stupid o’clock for the drive down. (OAPS) HA..

We arrive on the Thursday morning and the festival itself didn’t actually start until the Friday, so we headed down to the beach where they were holding Surfing Competitions. We sat on the beach having a few drinks then headed back up the hill to the festival and stopped in a bar where we had some more drinks..

That night they had a few rides going and the silent disco, we started by sitting around the tent playing card games and some more drinking..

Friday the music started and this carried on until sunday night with the last act, Bastille… which was INCREDIBLE.

We chose to leave Sunday night after Bastille so we would miss all the queuing in the morning to leave the festival. We got home about 3am Monday morning and me and Rusty spent the whole day sleeping and eating so much food haha.

2 really odd things happened to us whilst we were there.. On the Friday night we were waiting to watch Faithless and the boys went to get us some drinks whilst we saved our spot.. they got back and Beth needed to go to the loo so we left them there, as we were trying to get out of this massive crowd something really odd happened (laughing trying to type this).. It was like a human tsunami.. but not a normal one? if that makes sense haha… it wasn’t like anyone got pushed, just out of the blue everyone kind of fell over.. like a bomb had gone off.. it was HILLARIOUS, but it probably doesn’t sound as funny on here.. you had to be there ok. haha. We got back to the boys expecting our drinks.. yet they were covered in them instead.

On the Saturday we were watching Clean Bandit whilst waiting for Rudimental to start.. and this is really embarrassing on our behalf, there was this man stood a few feet in front of us wearing all denim.. including denim shoes and a hat.. we found it hilarious as we were drunk.. and decided to name him, denim on denim on denim. (yeah cringe) anyway.. we are watching Rudimental and all of a sudden… denim on denim on denim is on the stage singing.. he’s only part of Rudimental isn’t he. How awkward.

Some of the acts we saw included-

July 2015 i finally went to Ibiza after years of wanting to go!

Me and 3 friends, Abbie, Jordan and Katie flew from Heathrow Airport, first class (because were posh like that).. haha I’m only joking, we had a lucky upgrade!

We arrived in Ibiza on the one week they had a massive heatwave, it was amazing yet unbearable!

We managed to do so many things, including…

2 Parties at Ibiza Rocks where we watched Hannah Wants and The Libertines.

Cafe Mambo to watch the sunset

It was coming up to mums 50th birthday and I wanted to do something really special for her.. So what’s better than a trip to celebrate in Paris?!

We kept it a surprise untill we got into London and she was in complete shock!

Anyway we had three days in Paris to do as much as we could.. And what a better way to spend it than visit.. DISNEYLAND! Everyone has to admit they have a guilty pleasure for Disney right?

We had the most amazing day there, meeting the characters and going on every ride possible!

We then finished the day watching the disney parade which has now made me want to quit my job and work as a Disney princess! (Every girls dream)

Today we decided that we would visit all the big sites in the center of Paris, there is a bus that travels around in a big circle passing all these monuments including the Eiffel Tower and Notre Dame Cathedral. You can hop on and off the bus whenever you like!

As you could guess today was another full on day with so much to do! We managed to fit in so many sites in the space of a few hours! Knackered wasn’t the word.

Out of all these my favourite has to be the love lock bridge which is such a beautiful place. I would definitely recommend making a lock and visiting here if you go to Paris!

If anyone is looking for a short break away I would recommend Paris as it is such a beautiful city with so many different things to see and do! 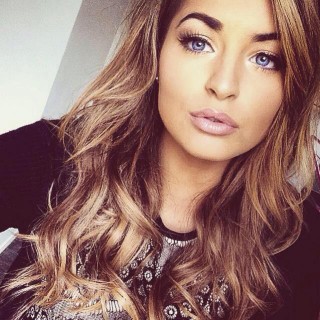